The Making of the Maps

How the Heritage maps were created

This set of Huguenot maps was created by Louis Gerber, who qualified as an advocate, then worked in the foreign service as political advisor to UN Ambassador Charles Te Water and as private secretary to JGN Strauss of the United Party, before taking up a senior position in the Automobile Association. He then became director of the South Africa Foundation, where he stayed until his retirement .

Louis started work on the maps in 1989 and after an extensive amount of research he completed them in 1990. In his retirement years Louis became an accomplished watercolour artist and created an impressive series of paintings of Table Bay through the centuries. These are his descriptions of the maps and his acknowledgements: 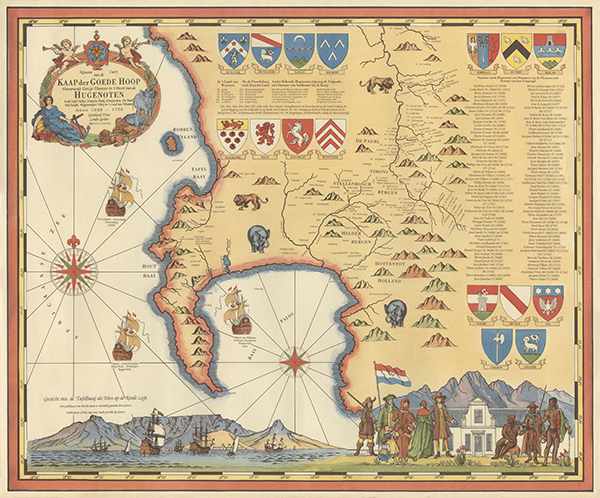 The title translated from the Dutch, reads “New Map of the Cape of Good Hope showing Certain Farms in possession of the Huguenots in the Table Valley, Fransche Hoek, Stellenbosch, Drakenstein, Pearl, Wagenmakers Valley, Daljosaphat and the Land of Waveren.” This legend is framed in a cartouche surmounted by a shield bearing the Huguenot emblem flanked by two herald angels with, below, an allegorical figure with anchor and cornucopia signifying Hope and Abundance. The cartouche is further embellished with wild animals, vines and grapes. At lower left is a view of Table Bay as seen from the anchorage – a common feature of old maps – and on the right a group of refugees, officials and aboriginals set against the background of the Simonsberg and an old Cape manor house, at present the Huguenot museum in Paarl.

At the top centre and on the right are the armorial shields of a number of well known Cape Huguenot families with lists of names. Next to each name on the right are one or more numbers and dates; these numbers correspond to the numbers of the farms on the map and the dates indicate the year in which the farms were allocated. 0n the left are the names of other Huguenots with an indication of their calling or profession as well as a list of land grants in places outside the borders of the map. On the map there are also a number of “unnumbered” farms which are, or were at some period, in possession of Huguenots or their descendants. On the sea are representations of ships with the names of the 14 vessels known to have carried refugees to the Cape.

The full title translated from the French, reads “General Map of the Kingdom of France, Showing Important Places during the Religious Wars of the XVI and XVII centuries, as well as the Names of Certain Huguenots who Fled from France and who Established themselves at the Cape of Good Hope. ”

This legend is framed in a cartouche depicting the Muses of History and Poetry paying tribute to the symbols of the Reformation, viz., the Huguenot cross, the seals of Calvin and Luther and the armorial shields of Henry of Navarre and Gaspard de Coligny.

At lower left is a representation of the statue by Coert Steynberg at the Huguenot monument at Franschhoek, flanked by the figures of Jean Calvin, Martin Luther, Henry IV, Jeanne d’Albret and Coligny.

0n the map itself are views of the Port of la Rochelle and of the church of St. Thomas and the Cathedral at Strasbourg. 0n the right, between the armorial shields is a list of the names of 72 of the founders of well known Cape families, the year in which each arrived, his place of origin in France and the present form of the surname.

While the maps are primarily decorative, l have tried to make them as accurate as possible within the limitations of the small scale on which they were drawn. The historical facts, genealogy, place names and the location of farms were based on the latest available research and in this regard my special thanks are due to Prof. M. Boucher of the University of South Africa and the author of “French Speakers at the Cape – the European Background”; to Prof. F.C. Fensham and Dr. Pieter Coertzen, both of the University of Stellenbosch and co-authors of “Die Hugenote van Suid-Afrika, 1688 – 1988”; to Dr. C. Puma, Editor of ARMA, quarterly of the Heraldry Society of Southern Africa; to Frikkie Botha, bibliophile, collector and former Ambassador in Washington; to Marianne Gertenbach, curator of the Huguenot Memorial Museum at Franschhoek, and to my wife, Mabel who devoted many hours to research, the checking of data and the geographical location of farms and towns. To all of them and the many other friends, too numerous to mention, who gave help and encouragement in what turned out to be a long and arduous undertaking, I offer my gratitude and appreciation.